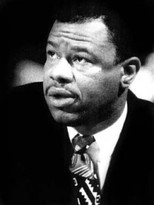 Ricky Byrdsong was the men’s basketball coach at Northwestern University from 1993 to 1997. A victim of a hate crime, he was murdered by a member of a white supremacist group on a street near his home in Skokie, Illinois, on July 2, 1999 while he was jogging with Ricky Jr. and Kelley, two of his three young children. The Evanston YWCA Memorial Race Against Hate and the Chute Middle School PTA sponsor the Ricky Byrdsong Citizenship Award, both in their 17th year, to honor the spirit and legacy of Mr. Byrdsong.
A documentary film, "Fly like the Byrd," about Mr. Byrdsong was produced in 2009 by
Northwestern University Journalism students, to view the film select http://vimeo.com/5204860